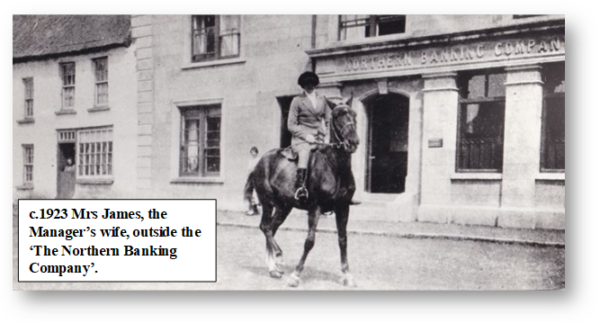 Opened in 1920, the Bank was in fact constructed by repurposing two existing domestic dwellings in a prominent location in the village square. The first floor of the building, and one room on the ground floor, provided the space for the bank manager’s family and a servant. Throughout the twentieth century numerous changes were made to the banking-hall in keeping with technological developments, the original coke fired heating system was replaced by electricity and the internal arrangement of the banking facilities were greatly enlarged by the erection of a lower-level, workspace extension. By the early years of the twenty-first century, the banking-hall had lost most of its original internal architectural fixtures and fittings to the cause of modernity. The Bank closed for business in 2013. The bank manager’s rooms continued to be occupied until the 1980’s and thereafter served no practical function but did retain their original configuration and some original features such as cupboard doors and ceiling mouldings.

As was the case in many villages, the loss of the only bank was keenly felt by the people of the area. In addition to the practical financial difficulties that the closure caused, there was a deeper sense of change to the routine of village life, which was heightened by the fact that the vacant building soon took on the appearance of neglect. Its prominent position in the square intensified this disrepair and there was a genuine concern among the villagers about what would become of this significant structure. The value of the building had always been proudly felt and the fact that it was listed, and that it had been chosen by the Ulster Museum as ‘The Bank’ for inclusion at their Cultra site, gave it extra significance.